As the great Yogi Berra said, “It’s like déjà vu all over again”. What this period reminds me of, I am afraid to say, is the late 1990s. There are many, many differences; and I do not believe we are in a similar bubble. But the parallel I see is the expectation that returns will always be this high. A recent survey from Natixis found that wealthy Americans expect to earn 17% above inflation. Five years ago, that same survey had investors expecting 9%. During the 1980s and 1990s stocks had an average annual return of 18%. It should have been no surprise that after 20 years of high returns investors would expect them to continue, but what happened was much different. The decade of 2000 to 2010 was essentially flat. 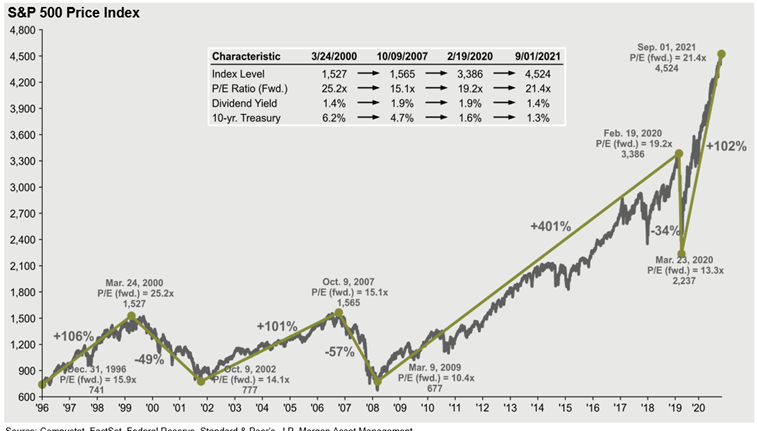 There are a number of differences between events today and prior years. As most people know, the stock market peaked in late 1999 / early 2000 in what is commonly referred to as the tech bubble. Valuation was very high with the S&P 500 trading at 25x forward earnings. Today, that forward P/E is 21x… high but not as high. The tech sector is where the real bubble was, with the P/E ratio at 62x earnings at the end of 1999, and many companies had no earnings.

Today, earnings are growing at about the same rate as tech stocks as shown in this chart: 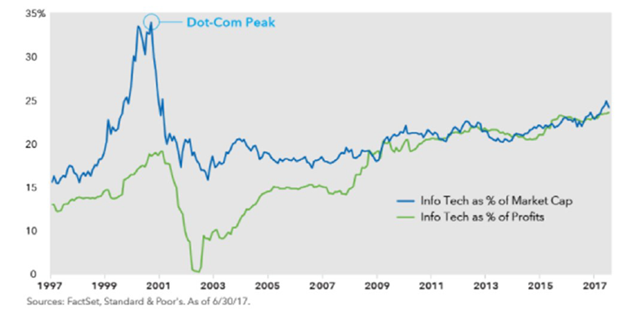 But… (there is always a ‘but’) in addition to the tech bubble, the reason returns were so high in the 1980s and 1990s is that the P/E ratio began the period at around 8x and finished at 25x. Interest rates began at 15% and fell to 5%. Multiples are inversely related to interest rates. Falling rates means rising multiples and vice versa. What is the situation today? Nothing is impossible, but multiples are not likely to quadruple and go from 20 to 80. Interest rates could stay low for a long time, but they are already near zero. They are more likely to rise than fall.

The late 1990s saw the creation of the internet; so there was this combination of falling inflation and interest rates, rising multiples, and exuberance about this new technology. The reality of the internet has probably been even greater than the hype, but it took longer than expected to achieve. We could be on the cusp of another leap forward in technology like in the 1990s. The creation of the COVID vaccines in such a short period of time, for example, could not have happened without the advancements in gene sequencing. Technology is changing our economy faster than we can comprehend, making companies more profitable than ever. Earnings are rising this year even more than expected, and next year should see another healthy increase. Longer term, we could have earnings growth at a sustainably better rate than in the past, but it’s near impossible to imagine having the tailwind from rising multiples as in that previous period. 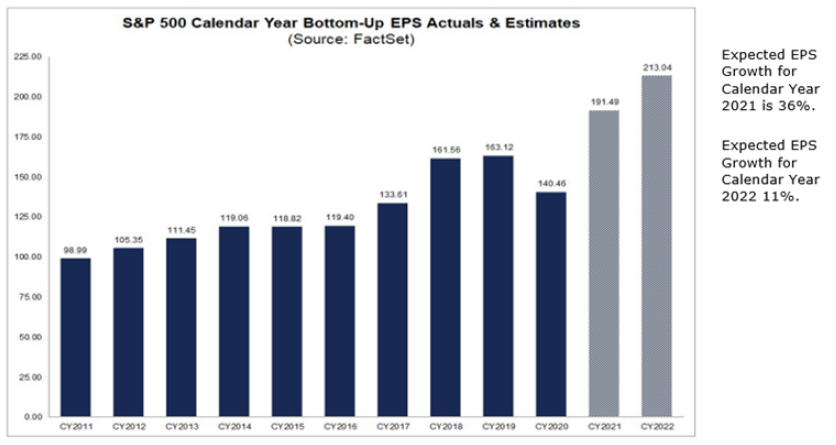 What about inflation? A sustained rise in inflation would appear to be the biggest risk to the economy. The latest inflation readings are in the 3% to 5% range, which is much higher than we have seen in a long time. 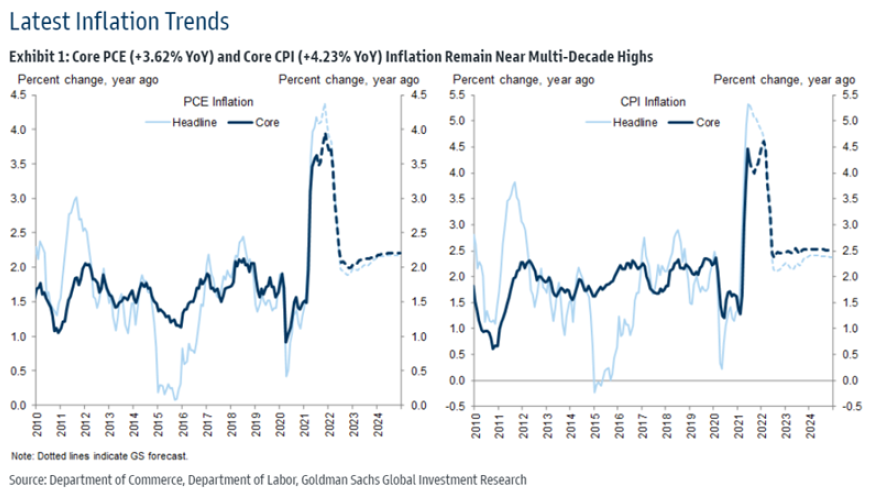 We fall into the camp that believes this is temporary. The economy went through an unprecedented process of shutting down and then re-opening. There are so many bottlenecks and supply issues that there are shortages of everything. It may take another year before things normalize.

However, there may be some generational shifts happening that lead to a higher level of inflation. For 40 years businesses have had the upper hand, but today they are having such a shortage of labor they are raising salaries and paying bonuses for new hires; and there just might be a difference between Baby Boomers and Millennials. Millennials expect more of a work / life balance. Could this change the dynamic between labor and businesses? Housing is another issue. It is in short supply for many reasons, and some are not temporary. A shortage of land is not a supply chain issue. It’s a zoning and scarcity issue.

Still, it is a little early to call a long-term shift. Inflation has been below 3% for 30 years and if you look even further back, the 70s and 80s were the anomalies. I once attended a lecture by an economist (whose name I can’t remember) who said something very simple, but to me it was profound. He said, “every period is built on the preceding period”. The inflation we had in the 1970s and 1980s developed because of events preceding it and the circumstances of the time. It is unlikely to be repeated. 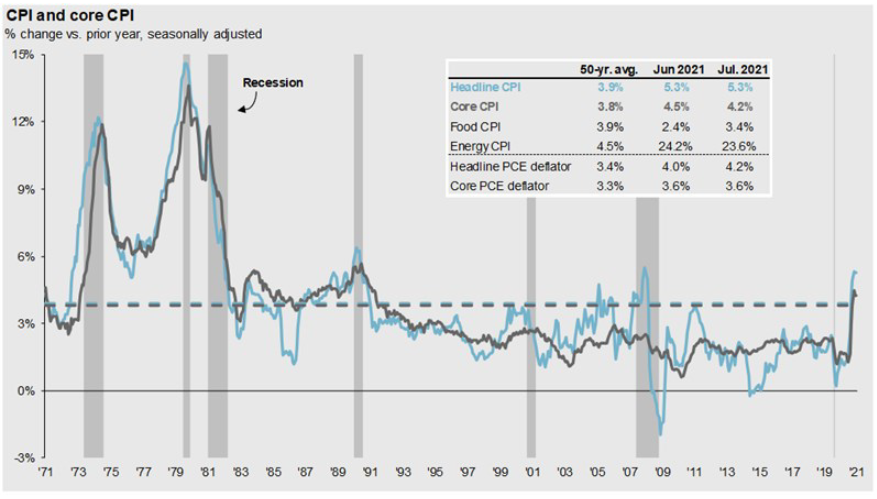 If inflation is only temporarily rising, then the Fed can keep rates low and be patient in raising them. That is what they expect and have signaled to the markets. Of course, the facts will dictate what actually happens. Rising rates are often what ends an economic growth period and a bull market. We will keep watching but the Fed is probably a year or so away from beginning to raise rates. 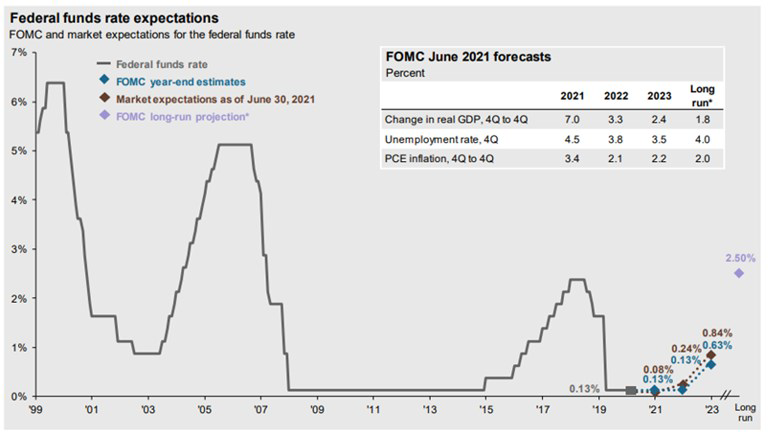 We have covered three of our investment pillars: inflation and interest rates, earnings growth, and valuation. The most important factor driving these things is the economy. We believe there is little chance of a recession in the near future, but the rate of growth is slowing. Peak growth was probably in the 2nd quarter, or maybe in the present quarter. As we go forward, government stimulus wanes, and while job growth will continue, it will slow. The Delta strain of COVID may slow things a little but is not expected to result in anything like the shutdowns we saw before. All things considered, we expect a strong economy as we head toward winter and into the new year, but not as strong as the last 3 or 4 quarters. 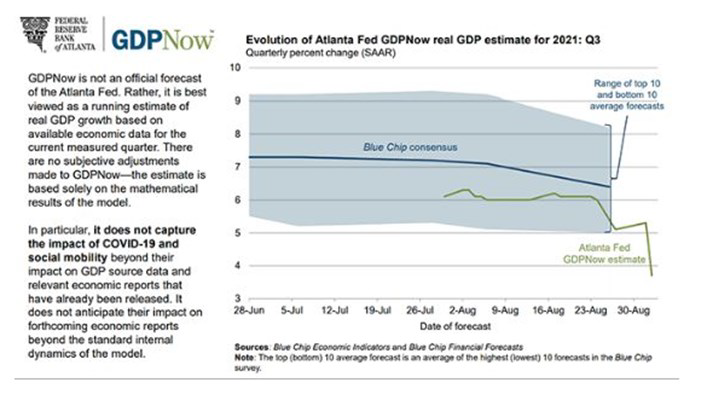 This brings us to our least favorite and the least important economic factor: the geopolitical situation. While Afghanistan was front page news for a few weeks, and we are saddened by the loss of our soldiers and Afghan citizens, its impact on the global economy is very limited. The hurricane that hit Louisiana has a much bigger impact on the economy. The Port of South Louisiana stretches for 54 miles along the Mississippi River and is the largest tonnage port district in the western hemisphere. Fortunately, the ports have re-opened after Ida, but many of the oil refineries have not. There will probably be some ripples through the energy markets until everything gets back online, and hurricanes and fires are not over.

The partisan divide in our country is not improving much, and while it is disheartening it doesn’t have much effect on the economy or investing. The infrastructure bill that was passed by the Senate is generally considered to be a good bill. Whether that gets passed in the House, and whether there is another, larger bill attached to it is an open question. The analysts we follow believe both will get passed later this year, but much watered down from the $3.5 trillion proposed.

From a personal financial planning perspective, an increase in income tax rates and / or capital gains rates are the most impactful. Again, analysts we follow expect much smaller increases than proposed. There is also a chance corporate tax rates will rise, which would affect expected earnings. None of these changes are market friendly in the near term. We are not concerned enough yet and there is not enough information to make any changes to our investment strategy, but it bears watching closely.

Finally, regarding market trends and sentiment, we call this the Energizer Bunny market. It just keeps going and going. We haven’t seen a meaningful correction since last November. When everything is quiet, and everyone is complacent, that is often when something happens. So be prepared, but don’t lose your head. As we have discussed, the fundamentals are sound so any correction should be temporary and not too deep. We’ll let you know if the facts change.

Have a great autumn! As always, thank you for your continued confidence.